As I mentioned last week, I have just started taking a course on Urban Sketching. One of the things we were supposed to do this week was to go out where there are some people, like an event perhaps, and sketch what we saw. We were to include the people in the drawings, even if they did move a lot. Sometimes they would even leave the scene before you were finished. Like most people, I’m not used to drawing in public. I guess that was the point, as I don’t feel the need to hide anymore, even if what I produce isn’t fantastic art. Anybody who came to see what I was doing seemed to understand that it’s more about the process than the result. It was all a learning exercise, and I really enjoyed my week. 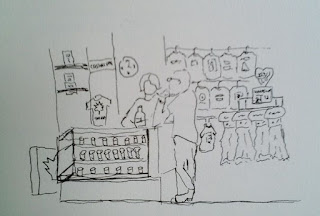 We did some rambling this weekend. Saturday, at one point, we were in the St Laurent Shopping Centre in Ottawa. While I was waiting for my hubby to get his glasses adjusted at Lenscrafters, I had a few moments to do a trial run on my homework. I say trial run as we were supposed to spend more time than I actually had there. 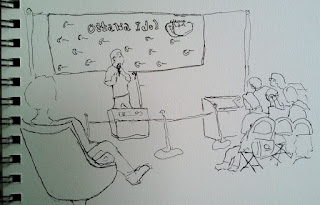 Then, while having lunch at the food court, where I resisted trying to draw, we heard music coming from downstairs. I looked over the rail and discovered that the Ottawa auditions Canadian Idol were underway. After lunch we went down and watched that for a while, and I did a bit more practice sketching. 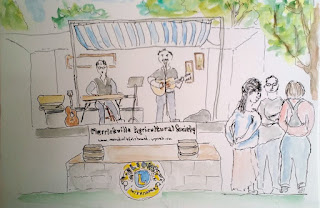 On Sunday I had the morning to myself and Canalfest was happening down at the Blockhouse Park. I decided that would give me the time and opportunity to do my homework properly.  I sat in the middle seat of the front row and concentrated on the musicians. They could see that I was trying to draw them but it was the wife of one of them that actually came over to see what I was up to. She seemed to like it and wanted to show her friends. That’s a bit embarassing but one of them even suggested I send it into the local paper. That’s not going to happen! (except my blog gets reposted at Hometown TV12 in Brockville  LOL). 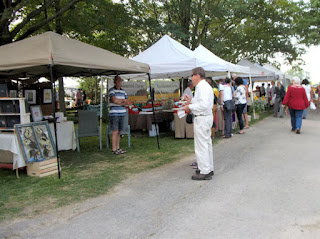 Sunday afternoon I wanted to go check out a Sunflower festival at Krinklewood Farm near Frankville. I expected to get a lot of pictures of fields full of sunflowers, but even though such fields were indicated on the map, there was no sign of them. There were lots of venders though.  The only sunflowers I found were those on the pottery of one of the venders, and in a few vases. 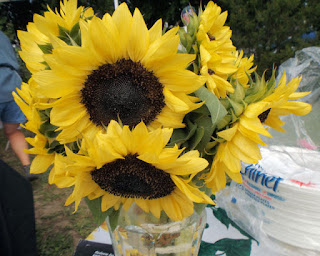 It was a good weekend, and while my Urban Sketches may not be great art, they do represent the things I saw, and I am definitely more comfortable making marks in public.

Did you enjoy this ramble with Karen? Check out our blog page to read more of Karen’s adventures or introduce yourself to some of our other featured bloggers.  To see the full archive of Karen’s past blogs visit her blog at www.otherrambles.blogspot.ca.