Some people are lucky, and some people are not. I spent the majority of my life never winning anything. Well, that’s not quite true as I did win a record album from a radio station once when I was a teenager. That got me all excited, but I never did get it. I expected it to arrive in the mail, but perhaps I was supposed to somehow make my way across the city to fetch it. No such luck. I ended up more disappointed than if I had never won it at all.

My youngest son won a Mickey Mouse phone from an Ottawa TV show when he was about 8, and he managed to win a couple of summer camp trips too. I thought he had way more luck than I’d ever had. Perhaps it had just skipped a generation or something.

Things changed for me about 5 years ago when I suddenly had a winning streak. I enter contests on line and was doing rather well.  Then it petered out again and I was actually having bad luck for a while.

This year has been extremely lucky for me so far, though I expect that luck just has to run out any day now.

In February I told you about winning a big basket of goods from the merchants of Almonte. Since then the BzzAgent people sent me an Oral B Genius 8000 electric toothbrush to test. The thing is amazing as it works with my phone’s blue tooth and actually teaches me how to do a better job of brushing while it gets my teeth dentist clean. It was worth about $200 but all I had to do was write a review. 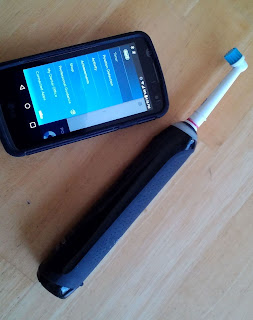 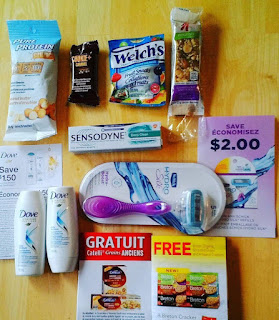 Of course I managed to score a box of goodies from Sample Source too. That also takes luck and timing. I always count myself lucky when I manage to get one.

Then recently I went to the Shop Local Showcase in Kemptville and, as usual, filled out slips for various draws I found there. I was present when I won one of the hourly prizes. I got a $25 gift card for Hard Stones Grill. Later in the week I got a phone call and found out I had also another basket full of stuff from the Royal LePage realestate booth.  That’s almost embarrassing as that’s the booth I went to first, when I was trying to discover who had called my name. And before I could even get into Kemptville to pick that up, a new friend, Gary Blake,  presented me with a lovely painting he had done out of appreciation for some little thing that required no reward. Lucky is one thing, but who can believe there would ever be so much of it all at once! It’s been an amazing week! 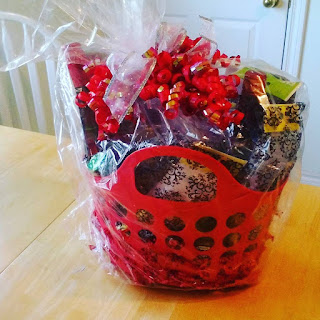 I picked up the basket this past weekend, and it contained two bottles of Wayne Gretsky wine (one red, one white), four jars of Mrs McGarrigle’smustard, a $50 gift card for Heather’s Healthy Harvest, another $50 gift certificate for the Brigadoon, and also one for a car wash. The rest of the stuff in the basket had to do with rolling your own sushi. That’s not something that is likely to happen in this house, but I’ll find someone who will appreciate it.  Maybe it’s even you, if you tell me a story about how you do such things at your house or what on earth got you started.  I’ve had such great luck lately, I think it’s time I gave something away.  You deserve a reward for reading this far, or for answering my question on Facebook. Only a couple of my facebook friends have done that so far, so this is your chance to see how I actually win things. I pick contests like this, where the odds are really good as there won’t be a huge number entering. I’ll pick the winner on June 5, 2017.  I’m sorry, but you will have to be living in Canada to win though I’d love to hear stories from the rest of you too..

Did you enjoy this ramble along with Karen? Read more of Karen’s adventures right here on Hometown TV12’s blog page!  For the entire archive of past blogs visit: http://otherrambles.blogspot.ca