I promised not to do the Bah Humbug thing this year when I was incapacitated last year and couldn’t do all the usual Christmas chores. I found myself stuck on the couch with a bum knee and all I could think of was all the things I wanted to be doing. Things I normally complain about. Christmas is a lot of work, and though I’d finally managed to get out of it, somehow I longed to do all those things that make Christmas merry and bright.

So this year, with all the pressure back on me, I’m trying to just do it and be happy about it.  But you know what?  Even just buying presents isn’t as easy as it once was.

I have two grown sons. Each year I ask them for a Christmas list. The younger one usually likes to challenge me to find some obscure music.  This year he wants clothes. But then he says we are not to buy them for him as he says they will never fit. I’m having no luck in finding out what store he buys from, either, so I’m even afraid to go the gift card route.

The other son gave me a list of possibilities. They are more likely impossibilities. This year he has done his brother’s thing and is sending me on a hunt for strange things like DVD’s of 60’s concerts and CD’s of 90’s surf music that sounds kind of 60ish.  As strange as that may sound, I can find the CD’s, but they are either way over budget, or not available for delivery in time for Christmas. I’m not wrapping up a parcel that promises something is coming. Last time I did that, it kept getting back ordered, and didn’t actually arrive until August!  I may have to buy a couple of t-shirts but they would have have some sort of classic rock band or character on the front, according to his list. 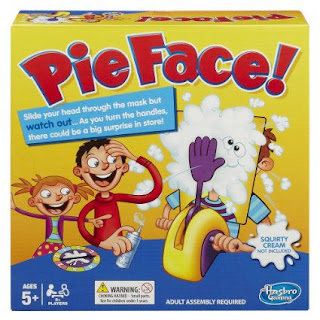 I can’t get a list out of my grandsons at all. The youngest has Pie Face as a top priority though, and the older one wants more expensive things like a new IPad, or a hover board. Pie Face isn’t coming into my house.  Nope! I can just imagine the whipped cream flying everywhere! And last time I checked that was an apple tree growing in the back yard, not a money tree, so his big brother is out of luck for his wishes too.

It used to be you could go out and buy kids toys and they were thrilled to unwrap them and play with them. It kind of made Christmas more magical to see the kids so happy playing with their new toys. They were even happier if you played with them. Now they are more interested in electronic gadgets. They happily download games when gifted with ITunes cards but the most interaction I can get from that is when the older one asks me to sit beside him while he plays, and just watch what he’d doing. I’d like to play too…..even if I have no idea what he’s doing. For some reason, he never lets me.

I can usually think up something to buy my hubby, but I’m always afraid he will be disappointed.

Lots of people say, “Just buy a gift card,” but I feel that if I give you a gift card, and you give me a gift card, then we might as well just keep our own money and go buy something for ourselves.  Oh, I did have one friend who had a deal with her hubby that they could each spend a certain amount on things for themselves. They still had to wrap up their purchases and put them under the tree. It was only the spouse that the gift wasn’t for that didn’t know what was in it until it was unwrapped. I could go for a deal like that myself.

Christmas isn’t all about presents, I know, but it’s still a big part of the tradition around here. At the moment I’m still struggling to find some appropriate gifts. Some things have been purchased. Some things have even been wrapped. Other things are coming in the mail…..soon, I hope. And yet others have not even been dreamed up yet. A real list from everyone would be helpful. At least I’d have a clue.

Go write your Christmas list for those you love, to help make their shopping easier. That might just be the gift they will be most grateful for this season.

Did you enjoy this ramble along with Karen? Read more of her blogs right here on Hometown TV 12! For a complete archive of her blog, visit www.otherrambles.blogspot.ca.