Here we are at mid-year and I have to wonder how you are all doing at keeping your New Year’s resolutions. I called them New Beginnings this year and had three of them on my list. I’m not doing so well with the weight loss and tidying but I’m certainly having a great time keeping the third one. That’s all about furthering my art.

I have gone out of my way to make sure I learn new things this year. As I’ve told you I took a course through Sketchbook Skool called Drawing Without Talent and really enjoyed it. I was so pleased to see a definite improvement in just a month’s time. 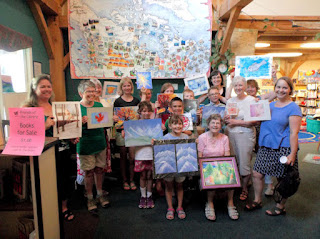 Then I got involved with a group that met at our local library once a month. I was introduced to a lot of new mediums while we set about creating an art project for Canada’s sesquicentennial. The work was all photographed and printed on shipping labels that were then stuck onto a map of Canada in a way that corresponded to the regions. The map was unveiled this past weekend with just some of us in attendance. 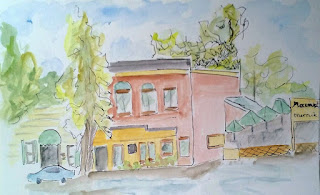 In the meantime, I took on a five-week course at Sketchbook Skool that, among other things, had me go sit in a public place and draw what was in front of me. I had never done that before and I thought it was great fun. It will be my new summer pastime. In fact, I just got invited to join a local group that would be doing just that each and every week throughout the summer months. A year ago I never would have considered accepting such an invitation but the Sketchbook Skool courses have given me the confidence to jump in with both feet.

I stopped by the Sketchbook Skool closed Facebook page to tell them about it. I was excited by this new opportunity and wanted to thank them.  They put out a weekly bulletin in video format for the students and they even mentioned me in that (from about the 1:20 to the 2-minute mark). While Dean of Students, Morgan Green, managed to put her own spin on things what she said rang truer after I actually experienced my first session with this group. We met in a local park where there are all sorts of sights worth drawing. I expected everyone to gravitate toward something of interest to them, but they all clustered around two picnic tables. I stayed close to them but sat off to the side where I had a better view of a suitable subject.
I like to draw in pen and then apply a watercolour wash. I forgot my watercolours at home but did have my watercolour pencils with me, and a water brush, so I used those. One young gentleman was interested in this process so I showed him how it worked. Me! Not only was I exposing my scribbles to a known artist, but actually showing him how to do something! I’d certainly call that progress, wouldn’t you?

Now, if I could just do so well with the tidying and weight loss…… Maybe another new beginning is needed for the second half of this year.

What have you accomplished so far this year? Or do you need to begin again too?