Last month I saw an ad in the local newsletter that offered something to do with adult art at the library. There has often been art for children, but this was the first time I’d ever seen anything for adults being offered there. I e-mailed the library to get more information and sign up. The librarian got back to me and seemed to suggest that perhaps this particular art experience wouldn’t be something I’d be interested in. Or maybe I was reading between the lines.
As it was explained to me Gloria Stowell was offering an art workshop geared for people with little or no art experience.  She was hoping to reach out to people who are interested but intimidated by the idea of creating art.  It would not be an art lesson per se, but more an introduction to some art techniques and an opportunity to explore one’s own creativity.  The workshop would have a theme (in this case, painting a winter mountain scene), but people would be doing their own thing within that framework.

Somehow the librarian knew I’d done a lot of painting, but what she didn’t seem to know was that  I’m in the process of exploring my own creativity. I am still highly intimidated by the idea of creating a painting from scratch so I thought this workshop just might be right for me after all.  I did offer to go on a waiting list, though, so that I didn’t take the space of someone who might need it more.  In the end, she decided to have the Gloria phone me.
When she did, I had company, but got very excited.  Gloria had seen my blog and said that she noticed that I tried all kinds of different things and after a brief chat declared I’d be perfect for this workshop. I was in, but I had to ask, how she found my blog. She told me the librarian had directed her to it.  The librarian reads my blog? Can you see me doing a happy dance here?  I don’t know if she reads it often or what, but the fact that she would even remember the name of it, so she could direct someone else to look at it just thrilled me to death!  My company was quite amused by my glee. Personally, I wasn’t sure what made me happier, the chance to join the workshop or the idea of an actual librarian even knowing I had a blog.
And so it was that I took part in the first workshop. I asked Gloria where she would be standing so that I could pick a spot nearby. I’m deaf enough even with a hearing aid that it helps to be near the person I’m supposed to be listening to. 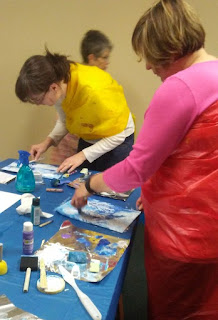 There were eight of us around the tables. We were given a piece of multimedia paper and some paint (two shades of blue and some purple). Gloria pointed out the implements on the tables, which included little paint rollers, some sponge brushes, and an assortment of palette knives. There were no normal paint brushes anywhere. She showed us a few paintings she and a friend had recently done using these tools and then showed us various ways to apply paint with them.  The idea was to use what we had in front of us to explore, not to be goal orientated, or worry about how our art was turning out. We were to think in terms of winter but we were not to have a picture in mind before we started.  To start us off, we were told to get the paper covered with paint for the background. 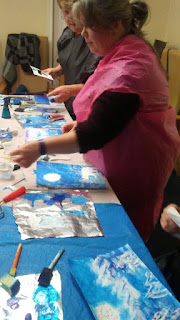 I wasn’t fast enough to get my hands on a little roller, so I started spreading paint with a dry sponge brush. The only water we were provided with was in a spray bottle, which we were told to use sparingly, as the paper would curl if it got too wet.  I started off with the darkest blue at the top, as the sky overhead is darker than at the horizon. I got part way down and thought I should have left some clouds, because, even though I had no idea what the picture would turn out to be, I did know I was working on the sky. I left some white spaces and tried to dab out some of the paint further up that had already been laid down. That’s about when we were also given some white paint so we could make snow scenes. I dabbed a bit of that on the tops of my clouds, and they looked a lot better. So then I continued on down the page, getting lighter as I went until I suddenly got the idea that whatever my scene turned out to be, it could have a river running through it. Oh, and let’s put in a tree using the palette knife technique we had just been shown and a few suggestions of trees on what could be hills in the background. 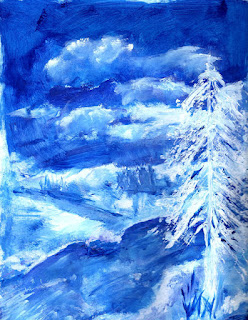 We had the opportunity to use some stencils of snowflakes and polar bears if we wanted to, and there were also lots of glittery stickers to apply if inclined. I learned how to use a rubber stamp with acrylic paint. That’s a technique I’m sure to use more and more frequently as I create more stamps of my own.
It was fascinating to see how everyone’s painting came out so completely differently. It was great to be able to explore the acrylics and the tools without any pressure to produce something wall worthy.  I think my results proved I’m in the right group, despite any experience I’ve gathered along the way.
We only had an hour and a half to work on our projects (including clean up time), which is quite a bit less time than it normally takes me to finish a painting. The lady next to me really liked my tree. I can’t say that I do, but I’ve had time to think of how I might fix it and the water, so perhaps I’ll do that, or duplicate this unplanned scene again here at home on a sturdier background.
It was a fun evening, and I’m so glad I got to take part. Next month we will play with oil pastels, which is something I’ve never done. I can hardly wait.
Did you enjoy this ramble along with Karen?  Check out more of her past blogs right here on Hometown TV12’s blog page!  For a complete archive of past posts visit her at www.otherrambles.blogspot.ca.