I am forever asking my friend if she has her ears on. She’s supposed to wear hearing aids but she seldom does, at least when I’m with her. We have weird conversations as I’ll say something and she will respond as if I said something else entirely. I’ve often wondered why she so frequently leaves her hearing aids in the box at home. I wear one too, but for me putting it in is just part of getting dressed. In fact, it may be the first thing I reach for in the morning so that I can understand what my family is saying to me as they get ready to go off to work.

She isn’t the only one I know who I often catch without their assistive devices. One won’t have hers on if she’s at home until I come along and start to talk to her.  Then she will dash off to get it. Another old dear loves to spend time with people but will get upset when they ignore her. She has hearing aids but she doesn’t wear them. She’s in her 90’s and just can’t manage to put them in as her hands are rather arthritic. She has the tiny kind that nobody would notice in her ear. I wondered why someone had not taken her back to the audiologist and told him that this style simply is not suitable for her. I know I could have done that whenever I got a new one. She has a valid excuse for not wearing hers, whereas I always assumed the others I know that are often running around without their aids in just never bothered to form the habit.

Hearing aids do take a bit of getting used to while you train your brain to distinguish one sound from another all over again. The thing is if you have a hearing problem not only don’t you know what it is you are not hearing, but you are more prone to both dementia and balance problems that could lead to falls. It’s important to wear the darn things!

Recently I’ve had trouble hearing properly and have been making people repeat themselves entirely too often. I decided it was time to go see if it was me or my assistive device that needed help. My husband went so far as to tell the audiologist that this was the worst hearing aid I’ve ever had (it’s my 4th). The audiologist was visibly shaken to hear that and asked me why my hubby would say such a thing. After all, this was a top of the line unit that he fought to get for me when the last one was found to be defective. I told him the truth. I make the poor man repeat everything he says and it’s driving him nuts. Him and a lot of other people, I might add. I said that I was sorry to have to come in complaining but he quickly told me that since I’m an experienced user, he trusted that I knew when I was having a problem. He put the aid on a testing machine and looked closely at the results on the screen. He was quick to say there was definitely something wrong and pointed out several numbers that he said were out of line with what they should have been. He wanted to send it in for repairs. 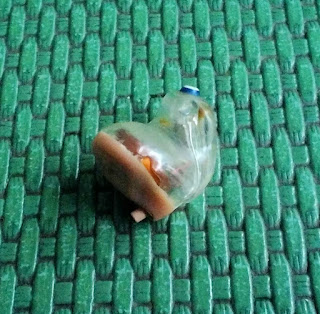 That was December 13th. I had a play to go to that weekend, and my grandsons were coming for their birthdays. I suggested we wait until after Christmas, but he assured me that I’d have my unit back before Christmas and he’d give me a loner.

I have mentioned in a previous post that I don’t wear the newfangled invisible style of hearing aid because I want people to have some clue as to the fact that I’m not ignoring them on purpose. If they can see a sign that I have a hearing loss, perhaps they will be more gracious if I don’t immediately know what they are saying to me. Most people these days though seem to be a little more vain and don’t want people to know they need help to hear. It’s like they have to admit to getting old or something. Such nonsense! 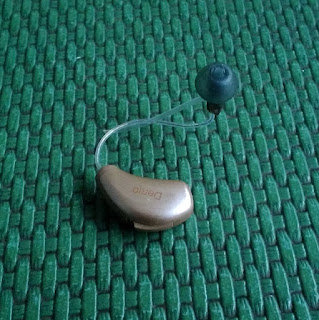 Well, the loner was one of those. A little plug fits right into the ear canal, and a clear plastic tube runs to the actual hearing aid hidden behind my ear. I will admit the sound quality was good, but I now understand completely why my friends would rather go deaf and leave their units in the drawer.

It’s not easy to insert that plug into my ear. It’s not easy to know how to even hold the unit so it’s facing the right way. If I had two of them, as most do, I’m sure I’d be doubly confused.  These things are a real pain to put on, even without arthritis crippled hands. I’m so glad I have my large, noticeable unit, and I could hardly wait to get it back.

So, if you or someone you know is in need of some help to hear properly unless you or they are extremely vain, you might want to reconsider taking on one of these invisible models. Think ahead and ask yourself how well you expect your hands to work in 5 to 8 years down the road. If you are young perhaps this might still be the right choice for you. If you are in or approaching your senior years, you may be better off with the larger unit. I know I am.

Did you enjoy this ramble along with Karen?  For more of Karen’s adventures and rambles visit our blog page, right here on Hometown TV12.  For the complete archive of past rambles visit Karen’s blog at www.otherrambles.blogspot.com.