When a man has time on his hands and you aren’t watching him, he will create a project that you are not necessarily ready for. That’s basically what happened here. 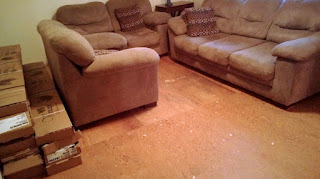 We have lived in this house for forty years now, and the old carpet had seen better days. Actually, it had some sun faded spots when we moved in, but those were only noticeable if you moved the furniture. Underneath it, the carpet was as good as new.  A year or so ago, the carpet decided to buckle, but only during certain kinds of weather. We knew we were going to have to do something soon. Then last fall it developed a hole. Just a small one, but a hole just the same.  I turned my back and the carpet was torn out. 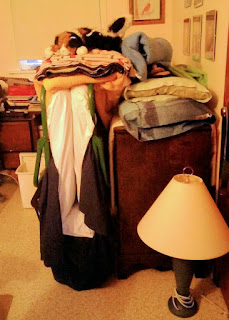 We’ve been living with plywood in the living room ever since. Normally one decides what they are replacing a carpet with before removing it. One of the main problems was that the existing coat cupboard had been added after the carpet had been laid, and was built right on top of it. How does one get a new carpet to fit under there?  We did look at carpeting but eventually decided to go with a hardwood floor instead. When we were in the market for a house, I knew only that I didn’t want any wall to wall carpeting and I didn’t want a dining room. Well, I have no dining room, and only the living room had the carpet. Now, after forty years, I get the house I went shopping for. 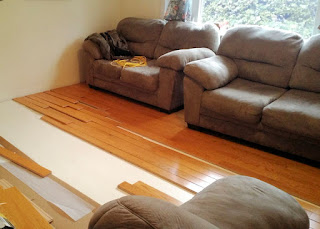 But what did we know about wood floors? Did we want hardwood, engineered hardwood, or laminate?  While we had already decided that my office will someday have laminate flooring, I didn’t really think it was suitable for the living room. Apparently, it’s been greatly improved over the years though, and we did consider it for a while. We had no idea what engineered hardwood was and had to look into that too. Hubby probably drove our flooring guy a little crazy with all his questions. Me, I was only interested in the colour. I grew up in houses with hardwood floors and wanted it to have the look I  was accustomed to. I understand hardwood is a lot easier to care for these days, which is good, considering I’m now too old to be down on my hands and knees waxing floors like my mother used to.

The question we were frequently asked was what kind of wood do you want. But I don’t know anything about woods real or fabricated. We were presented with a few samples, which were not what I had in mind. They were either too light in colour, too textured, or too dull. We decided to take ourselves to the supplier and look at what was available. There were certainly a lot of choices, but my hubby and I both went immediately to the same one. That made it an easy choice. Red Oak. Of course, it came in three different grades, but if I’m going to invest in a hardwood floor, I want the best.  The rustic stuff would have been pretty, but not in my living room. The other one had boards with too much variance in colour and when we had a sample of that, it almost looked like stripes in places. We picked the top grade because it had a more even tone. Watching it being laid, I knew we made the right choice. 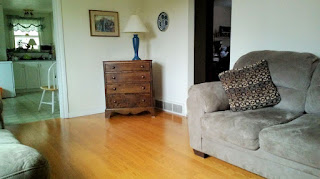 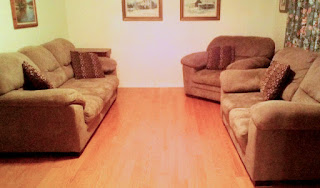 But first, we had to clear all but the three large piece of furniture out of that room. That certainly made a mess out of two other rooms for a day or so. The job got done, and we are pleased with the results. I may get an area rug, just to anchor the furniture. My 43-year-old tables will be replaced too. You know the kind…..boxy with cupboard doors….  I want something smaller, that I can just dust mop underneath.

My hubby caused this project to happen, so now he will have to put up with a bit of redecorating.  That’s only fair, eh.

Did you enjoy this ramble along with Karen? Read more of her adventures right here on Hometown TV12 under our Blog menu.  For a full archive of past blogs visit www.otherrambles.blogspot.com.