Up bright and early this morning as teddybear had a course this morning. The house is quiet save the sound of the rippling water in the fish tank.  It’s been a while since the house has sounded so calm and still.  Of course it could just be that I haven’t been awake early enough to witness it. I can hear our birthday girl calling it stupid-o-clock and I cannot help but giggle a little bit.

Our eldest daughter, ‘Carebear’ (she prefers Cayrbear), ‘baby girl’ turns 27 today and I can’t help but notice that she is now the same age I was when I moved out here 22 years ago and became their “Teemy-Mommy,” stepping into the role of custodial stepmom to a crew that was just 2, 4 and 5 at the time.  Fast forward to today and our beautiful little girl is all grown up with a babe of her own — who just happens to be the 4 years old that she was when I met her.

Featured photo: Caryn pictured here with baby Sasha a number of years ago. Sadly Sasha passed away just this past week at the age of 16.  This is one of my favourite photos of Caryn.

I will never forget the sweet smile of a little girl who had crawled up on my lap at her brother’s birthday party whose only request for her birthday was that I come back for her party in January.  I remember feeling a little panicked.  I had no idea how I could possibly make that work but I promised to try and for the moment that was enough.

When I went home after that visit, I couldn’t help but miss them. We’d had a lot of fun during my visit.

There were several conversations about how we might make another trip work.  There came a point where childcare became an issue, and it was affecting employment.  I’d facetiously offered to come and lend a hand.  I was a little past having had ovarian cancer, and a 2nd surgery for a benign cyst.  I’d been looking at courses that were wait listed and I was not really doing much at the time.

To be honest, I was mostly being my cheeky self.  We’d all been chatting on the BBS networks for some time and the offer came easily – I’d even surprised myself.  I’d joked that with James working at the college I might get a discount on the courses I was after and could do them by distance Ed while watching the kids – win win for everyone.  In a year or two, I’d return home and “IRL” would resume. Talking always came easy, we just meshed.  I honestly never thought it would become reality, it was a thought thrown into the mix — a half-baked one at that, but before too long the cookies became a bakery and I was on my way. 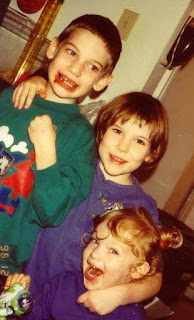 Telling Dad would be the hardest part.  He was not happy that I would leave him.  My promise to come home in a year or so was met with skepticism and attitude.  My sister had thrown a big fit that I couldn’t leave as her birthday was coming and I had to be here to celebrate.  As it happened, I booked my trip for the day after my sister’s birthday to accomodate and still arrive for Caryn’s birthday and as it turned out, my Dad and I spent the evening together as my sister was a no-show.

January 22nd became known as our “Brockville Birthday” and for many years it was celebrated as the day we officially became a family, and the “Familyzoo” was born. 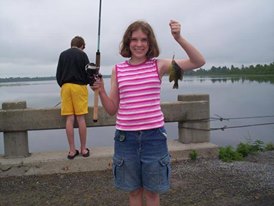 On the day of Caryn’s birthday party, sitting on my lap I’d told her that I had a special surprise for her before whispering in her ear that I wasn’t going home this time.  She’d squealed and wrapped her arms around my neck so tight.  It is a moment I’ll never forget.

I never planned to come, and I certainly didn’t plan to stay.  For years my Dad would call me a liar because I didn’t come home. I remember an early conversation with Dad telling me that this wasn’t my responsibility and I could come home any time among other choice words.  I’d said something about our kids and he’d informed me that I hadn’t dropped them so they weren’t mine. The kids all laughed their heads off when I got off the phone and one by one picked each of them up and dropped them on the floor (they were standing up at the time so they landed on their feet).  I then told them they could call Grandpa Wilson so they could tell him that I had in fact dropped them all, so that was the end of that.  Dad had laughed too. He told me I was nuts and I’d laughed and said “just like my Daddy!” 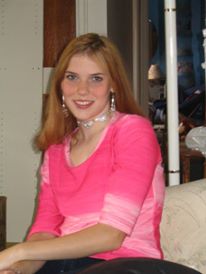 I could never have predicted that that simple request of a child would lead me here.  I often wonder if that little girl knows the impact that her birthday wish has had on my life.  A little leap of faith, and I was transported into a world I’d only ever seen in dreams.  There were a few nightmares too, but overall I would do it again in a heartbeat. 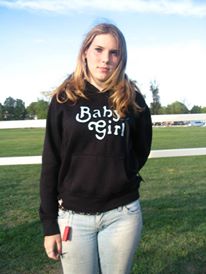 There are many things I’d like to think I’d do a little differently now, hindsight brings clarity to so many things, but at the end of the day we’re all human — doing the best we can until we learn a better way.  There is no manual and there are many MANY days when as you close your eyes at night and everybody is still alive, you call it a win. Becoming “Teemy” was the biggest (often hardest) and most rewarding challenge of my life. I didn’t always rise to the challenge gracefully, but nobody can ever say I didn’t try.

Even through all the med-crap, and the teenager years, I always knew I had something worth fighting for.  I got to come home to 3 amazing kids, and a wonderful man.  It’s the stuff that dreams are made of.   It’s not always easy, but nothing worth having ever is.  I can only hope you know how much I love you all.

And today, on Caryn’s birthday..  I find myself thinking about where we’ve been and where we’re going..  it has been an interesting ride to say the least.

As tough as the teenager years could be, and for all the times we quipped about eating our young, you did a great job in making it up to us when you made us Grandma and Grandpa — no greater gift was ever given. Good luck ever topping that one.

With the granting of one simple wish, my life has been forever altered.  I am both blessed and grateful. It was your birthday, but you gave me the biggest gift of all.